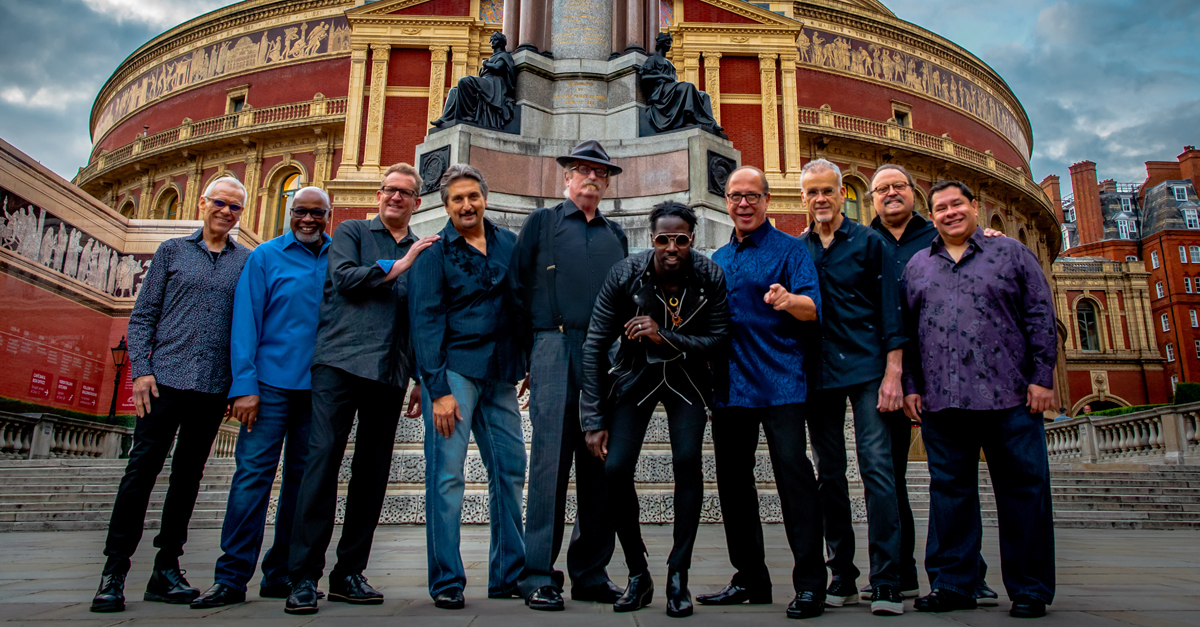 “We knew when we went into the studio, we were going to make the best record that we could make – the best album of our career. And we did. We took it to another level.” – Emilio Castillo

With a landmark 50th anniversary album, 2018’s Soul Side of Town, still visible in their rearview mirror, one would think Tower of Power (or TOP, as it is more often referred to by its global legion of fans), the much-lauded creators of their own horn-based, hybrid brand of East Bay soul/funk/R&B/rock, would take a well-deserved breather. But that is not in the band’s DNA, nor that of its founder and ringmaster, tenor saxophonist and bandleader Emilio Castillo.

Beginning with East Bay Grease, their 1970 album debut on legendary impresario Bill Graham’s San Francisco Records, the tireless unit has released 26 albums, been responsible for such classic hit tracks as “What Is Hip?,” “You’re Still a Young Man,” “So Very Hard To Go” and “Down To The Nightclub,” among so many others. TOP’s horn section, the heart of the band, have long been sought after sidemen, appearing on recordings by top artists ranging from Elton John, Aerosmith and Bonnie Raitt to Otis Redding, Santana and Heart. TOP paved the way for other high-powered brass rock/R&B hit artists of the 70s like Chicago, Earth, Wind & Fire, and Blood, Sweat & Tears.

Now, with their latest album release available on both on CD and LP, Step Up, the band forges on into the next decade of the 21st century, keeping to its continuous hardcore tour schedule (200 days a year!) and ongoing reinvigoration with the continual addition of new talent, most notably the phenomenal young lead vocalist, Marcus Scott, among many others. Marcus replaced TOP’s longtime lead singer, Ray Greene, who makes his final appearance with the band on Step Up. Also taking his bows on the new album is 30-year TOP veteran bassist Francis ‘Rocco’ Prestia, who is stepping back from life on the road and whose driving fingerstyle funk is ably replaced on tour by Marc Van Wageningen.

The new album came together in a somewhat unusual manner, Emilio says. In 2018, after spending a few years crafting a large body of new songs, TOP headed into the studio with Joe Vannelli, the GRAMMY® nominated producer with a long string of R&B, jazz, rock and pop credits. Between the writing, arranging and recording, says Emilio, it was a long and careful process – six years in the making.

“We knew when we went into the studio, we had so much great material, much more than one album,” says Emilio. About halfway through recording, he continues, Artistry Music [an imprint under Mack Avenue Music Group], the band’s new label, “loved what they were hearing so much, they wanted to put all the material out on one album for the band’s 50th anniversary.

“But we decided we were going to do the Michael Jackson thing,” Emilio laughs. “You know, where you record way more than you need and pick the best 12. So, we ended up with two great albums instead – Soul Side of Town for the anniversary and then Step Up for this year as we move forward.”

It’s been a long and sometimes bumpy road for Emilio and TOP, who says he feels fortunate to have found his calling in life and stuck with it, shepherding his ever-evolving band through the decades, keeping a dedicated fan base all the while.

In the early 60s, at a time when many kids were picking up electric guitars and listening to early rock and the British Invasion, Emilio was listening to R&B, jazz and blues. He asked his father to get him a saxophone instead and he never looked back.

“It was because of my father,” he says. “My dad was a bartender and he worked in joints that had bands with horn sections! I listened to ‘Harlem Nocturne,’ ‘Night Train,’ ‘Gigolo’ – songs like that were my early influences.”

He started his first band when he was 14 and says he has always had a band ever since. “I’d be lost if it wasn’t for the band,” Emilio laughs. “I play sax, but my instrument is the band. My talent is to help great musicians bring their sensibilities together.” The sign of a great bandleader, he observes, is to “not hog anything for yourself. You want to bring people in, create unity.”

By the summer of 1968, Emilio had already played in several bands when he met Steven ‘Doc’ Kupka, the baritone sax player and songwriter whose soulful style and Bohemian personality have become a defining part of the band’s songwriting, image and sound.

“Doc was the first hippie I ever met,” Emilio laughs. “He’s an old-school guy, an old soul. He just thinks differently.” Along with longtime drummer Dave Garibaldi, the three form the consistent core of TOP.

From the band’s debut up to Step Up, the TOP sound remains true to Emilio’s original musical vision: reach inside the deep, multidimensional well of what is broadly called soul music and bring together all its diverse components in a singular, emotional sound. With the exception of a brief attempt in the late 70s to chase the disco trend, the band has stayed true to that aim.

“Our label at the time leaned on us and they gave us a ton of money,” he says ruefully. “But we learned a hard lesson. It wasn’t us and we never again tried to change our sound. We thought we could sound like other bands? No. TOP has its own sound and it’s a blessing not a curse.”

Since that time, many great players have come and gone through TOP’s ranks, including Lenny Williams, the band’s lead vocalist on its classic early 70s hits. Anchored by Doc Kupka’s baritone, the renowned Tower of Power Horn Section has long been considered by many the best in the business and features 1st tenor saxophonist Tom Politzer and trumpeters Adolfo Acosta and Sal Cracchiolo.

The rhythm section is still powered by the original team of funkmasters: Garibaldi on drums and Francis ‘Rocco’ Prestia on bass, who have both been with the band since the debut album. Rounding out the 10-piece unit is gifted guitarist Jerry Cortez (nearly a decade with TOP) and soulful keyboardist/Hammond B3 specialist, Roger Smith, who will soon celebrate 20 years with the group.

Through the years, TOP has always been difficult to slot into established music business genres: soul, funk, pop, rock. It incorporates all of those into its own unique and easily recognizable signature sound.

“I don’t think in terms of genres,” Emilio says. “But the rest of the world does. Originally, we were called a soul band. And we do make original soul music. Then, because of Garibaldi, people started saying we were one of the greatest funk bands in the world. But funk is only a small part of soul music.

“Soul music encompasses so much,” Emilio continues. “It has those great love ballads, the ones that put you through an emotional wringer. It has shuffles, medium-tempo love songs – so many different aspects and ways to express them. We’ve incorporated and interpreted them all in our own East Bay way.”